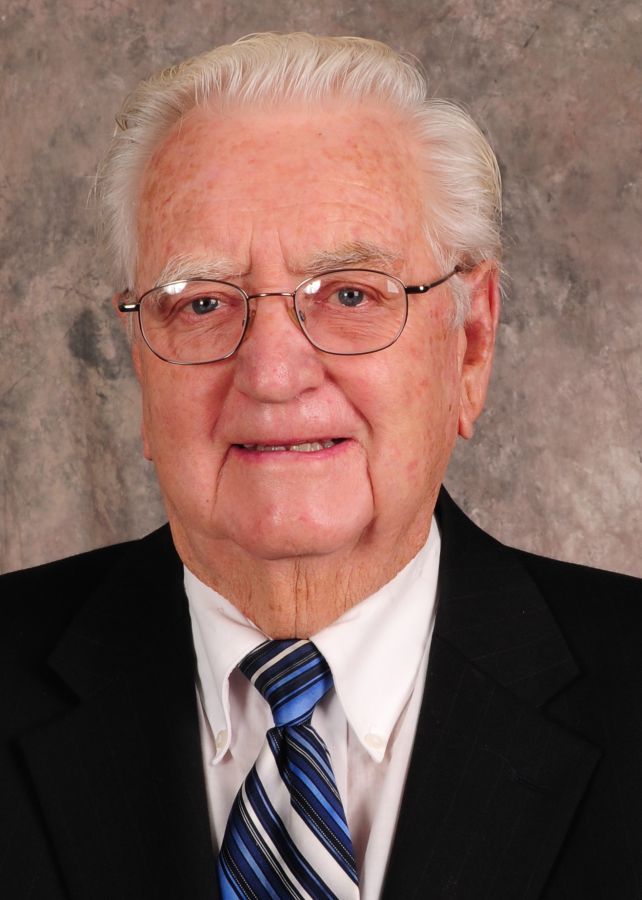 Verl T. Smith (92) passed away on August 6, 2019 after a brief battle with cancer. He was born on April 1, 1927, in Yost, Utah to Evelyn and Morris Smith. He had 7 siblings and attended school at Yost, Box Elder High School, Weber High School, and Ogden High School. He was a veteran of WWII and joined the Navy in 1945. He attended Weber State University and studied accounting. He enjoyed ranch life and the many social activities in the Yost area. It was during these activities that he met the love of his life, Delma Kimber. They married on July 30, 1948, in the Logan Temple and had 5 children.
He was a self-described jack of all trades, with jobs as a cowboy, substitute school teacher, and sheepherder as a few examples. Delma and Verl moved to Ogden, where he started working at the Utah General Depot before transferring to Hill Air Force Base. He retired in 1985 after 37 years of service. After retiring, he and Delma served a Mission in the Ogden LDS Employment Center. He was a devoted member of the LDS church and held various church positions.
He spent most of his spare time at their summer home in Grouse Creek, Utah. He was caretaker of the Grouse Creek cemetery, Chairman of the Grouse Creek Special Service District, and served on the Board of Directors of the Grouse Creek Co-op. He enjoyed building, repairing things, ranching, fishing, hunting, quilting and horseback riding. When in Ogden, he attended as many family activities as possible and rarely missed anyone's sporting event.
Verl is survived by his wife Delma, who he doted on ceaselessly until his passing. He is survived by his children: Susan (David) Wirick, Karma (Kevin) Allred, Alan (Judy) Smith, Becky Rasmussen, and Tracy (Ben) Boyd. He is survived by one brother, Clarence Smith, 13 grandchildren, and 18 great-grandchildren.
He is preceded in death by his parents, his siblings Irvin Smith, Beatrice Durfee, Delsie Teeter, Owen Smith, William Smith and Eugene Smith, and his son-in-law, David Wirick.
A viewing will be held on Sunday, August 11, 2019 from 6-8 PM at the Washington Terrace 5th Ward, 350 West 5100 South. Funeral services will be held on Monday, August 12, 2019 at 11:00 AM at the Washington Terrace 5th Ward with a viewing prior from 9:30-10:30 AM. Another viewing will be held at the Grouse Creek Ward from 4-5 PM and interment will be at the Grouse Creek Cemetery, where military honors will be accorded by the Veterans Honor Guard. Send condolences to www.gfc-utah.com

Alan, I am very sorry to hear of the loss of your father. Many blessings to all of your family, may God watch over you and comfort you. - Howard Meekf

I was sorry to hear of your dad's passing. Our thoughts and prayers will be with you and your family.

The attached photos are added to the memorial of Verl T Smith to help share their legacy.

Thank you for sharing your memory of Verl