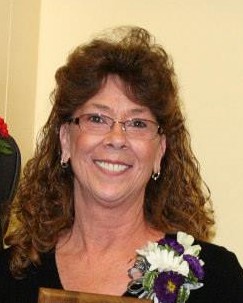 Donna Wadman Hamson
BRIGHAM CITY- Our loving wife, mother, grandmother, great grandmother, daughter, sister, aunt and best friend, Donna Marie Wadman Hamson, 60, passed away suddenly and unexpectedly from a massive stroke on Tuesday, March 10, 2020, at the Dixie Regional Medical Center in St. George, Utah.
She was born on March 31, 1959, in Ashtabula, Ohio, a daughter of James and Mary Elizabeth Gann Burgandine. She was reared and educated in Niles, Ohio. Donna spent most of her early years assisting her mother at work or in mischief.

At the age of fifteen, Donna left Ohio when cousin Jim, her mentor, ask her to come to Michigan to work in the restaurant he was managing. Donna left Michigan bound for Denver, Colorado where she has family when Jim moved to Utah. While in Denver she started her own family adding two daughters, Mary and Jennifer. In 1983 Jim once again asks Donna to come work for him as assistant manager of the Country Kitchen Restaurant (Now known as J&D's Family Restaurant). So off she went with daughters to Utah. Upon arrival in Brigham City, she fell madly in love with the mountains and vowed to never leave.

While in Brigham she met, married and later divorced Carl Wadman who adopted her two daughters and supported her in establishing the West Forest Kennels. She sold the Kennels after cousin Jim offered to sell J&D's to her.

After her divorce from Carl, She met and married the love of her life Dale Stanley Hamson. Their union merged two families and started an unbelievable love affair.

From the minute she saw the mountains east of Brigham, Donna made it a goal to make Brigham City her home and her community.

During her 37 years here she provided many services to the public. She was instrumental in Humane Society and was a staunch animal rescuer. She took in many dogs, cats, and a fowl foul mouthy African Grey parrot.

Donna was a school bus driver for Box Elder School District, driving routes in Corinne and Mantua. The students loved Donna, as being one of their favorite bus drivers. Many close and loving relationships, from the bus days, exist today. With many of the students stopping at J&D's to keep her up to date about their lives and show off their families.

Donna bought J&D's 23 years ago in September and has been a staple business in Brigham City ever since. Through the restaurant, Donna served her other animal Loves (humans) with daily hugs and laughter as well as a free Thanksgiving Dinner yearly for over 20 years, until her health wouldn't permit it.

In 2017, Donna started working for her very dear friend Brent at Gillies Funeral Chapel as a Comfort Specialist. Her hugs can soothe any broken heart.

Donna received the Total Citizen Award in 2012 from the Brigham City Chamber of Commerce.

In 2017 she along with Dale were honored to be Grand Marshall's of Brigham City's Peach Days Parade.

Since retiring from the day to day operation of the restaurant, Donna and Dale have been spending the winter months at the 4 Four Seasons RV Park in Littlefield, Arizona, where she met and fell in love with the most incredible people. Instantly developing many cherished friends and new family members.

Her favorite past time was fishing, hands down.

As a devout Christian, Donna studied the Bible daily.

Donna touched the hearts of many people and will be missed dearly.

She was preceded in death by her mother, three siblings, Jonathan Karsikas, Jim Burgandine and William (Big Bill) Burgandine and many beloved fur babies.

SUBJECT TO CHANGE BECAUSE OF THE VIRUS RESTRICTIONS: Funeral services will be private.
A memorial will be held at a later date. Interment will be in the Brigham City Cemetery. Send condolences to www.gfc-utah.com.


In Lieu of flowers, Please "Pay it Forward" whether it be a Hug, Animal Rescue or a Helping a fellow human. She lived a life of giving and service. The greatest tribute to her would be to "Pay it Forward" in her name.

Dear Dale and family, I've already written many condolences to you guys on Facebook but I think the mortuary copies these in print for you so I'll write it down. Donna was so special to so many people, she helped me so much when I lost my Tom..I could never thank her enough for that. It was an honor to know her and call her your friend. I will miss you sweet lady...more than you'll ever know. Go see Tom, and friends that have gone before you and have a wonderful celebration with them. Please watch over Dale and your family. Rest in Paradise beautiful lady! You are loved and missed! 💔 Gayda Sneddon

I was so saddened to hear of Donna's passing. She helped me with the Christmas Assistance Program for many years. She truly loved to give and loved to serve. I loved her smile, her quick wit, and her good heart. Thank you, Donna! Thanks to her family for sharing her with sooo many! God bless you, Dale & family. I will keep you all in my prayers. Linda Martin

Dale and Family: I am so sorry to hear about wife. Please accept my condolences.

I don't even know where to start, I'm devastated! Donna has been in my life since she drove our school bus 🚌. She taught me so much and never passed judgement. She was ALWAYS there when times got ROUGH. She could lift your spirits like nobody else!
Donna I have two favors . #1 PLEASE go find my DAD and give him the biggest hug ever.(He was probably there to greet you, no doubt in my mind. He loved you so much. You loved him lot's to.#2 Please watch over Dale and your family. There going to miss you like crazy. Especially Dale,life is going to be very different...
Until we meet again, fly high with the ANGELS!!!

So sorry for the loss of your beautiful mother, sister, grandmother. We had lunch at J & D's dozens and dozens of times. Donna always had a welcoming smile, would sit with us for a visit. Warm-hearted and loving. We will miss her lovely smile and infectious laugh!

Donna always had a smile for everyone regardless of how she was feeling. She will be greatly missed by all. Enjoy being with friends and customers who have passed on.

Donna was a beam of warmth and love that brightened the darkest day for people who came to J&D. For most of us, Donna was the soul of J&D, an example of how a Christian regards her employees, and a joy when she would spontaneously take a moment to talk with us. Certainly, in her new surroundings, she will seek out ways to serve and will be a significant leader. Our loss of Donna, though sad, is a cause for Heaven's celebration for a life wonderfully lived.

So sorry for your loss, Donna was an amazing wonderful woman and will be sorely missed by all who knew her.

You will be missed

She has been in my heart since the day I met her. Such a wonderful woman will leave memories with all who knew her. See you again my friend, keep up the good work in your new place and level.

What an Amazing Lady Donna was. She always lend a helping hand and let you know how special you were when you needed it the most. I will never forget you my friend. Thank You for always believing in me. My thought and Prayers are with your family. Love, Marla

I'm here to say Donna you changed my life

What an amazingly perfect tribute to Donna. Brought me to tears because there are few people in this world that are as giving and big hearted as she was. I am and will always be proud to call her my friend. I will never forget the times that we were able to spend with Dale & Donna. Rest in peace my dear friend.

My heart aches for you Dale and your family. You will all be in my prayers during this difficult time. Donna was truly one of a kind and I am sure Heaven is rejoycing that such a giving, wonderful lady has returned. May God Bless you all.

There's to Many, but the trip to Denver with her and Debbie, and Dina

My favorite memory with Donna was our summer employee parties and her choosing karaoke songs for others to sing and she chose Elvira for me to sing , I was 13 at the time and super embarrassed but she joined in to get me started and others joined in after and she sat down and just made it so fun !! Working with her for years on end was the best times of my life and she taught me so much and whipped me into shape when my teenage attitude came about !! She was my role model and because of her I always wanted to own my own restaurant!! She taught me how to be a hard worker and to stick up for myself !! Even after moving away she kept in contact with me and when she noticed I wasnt doing well she always had wonderful words of wisdom to give me for comfort !! She just truly cared about people she loved and I will miss her talks, hugs and comfort!! She was there for me when my baby passed away 10 years ago and always comforted me over it !! She would send me bible versus to help me out and I am going to miss her every second of every day!! My heart goes out to her family and to all who were lucky enough to know Donna !! Fly high with your angel wings and keep us all strong down here with your comfort and hugs !! Love Chelsea , your social butterfly !!

The services for Donna have not yet been added. Please sign up below to be notified when the services are ready.

Get Notified When a Service is Added

The attached photos are added to the memorial of Donna Marie Burgandine Wadman Hamson to help share their legacy.

Thank you for sharing your memory of Donna

7 Ways to Stay Positive During a Crisis